The only self-proclaimed ‘Belgian stout’ – 9% by volume – named after famed Belgian detective Hercule Poirot, a native son of Ellezelles. It’s every bit as sturdy and dapper as its namesake, and considered a World Classic.

The Brasserie Ellezelloise (pronounced “EL-ZEL-WOZ”), is located in the town of Ellezelles in the gentle “hill country” of Belgium. Founded in 1993, the tiny brewery manages to produce 1000 hectoliters per year – the most of any brewery of the Belgian Artisanal Brewers Guild. Housed in a picturesque converted barn in French-speaking Belgium, the brewery includes a cozy café to which the local folk and connoisseurs from Brussels love to repair on weekend afternoons. There you can enjoy a wonderful Ellezelloise brew, served by the brewer, Philippe Gerard.

The Hercule, and all Ellezelloise beer, has a very distinctive and intoxicating spicy aroma of fresh spruce that suddenly, irresistibly, fills the room when the swing-top is released. This unique house character probably derives from the strains of yeast used by the brewery – and possibly from the fermentation in oak – because the beers are made entirely of malt and hops, without any spices or sugar. 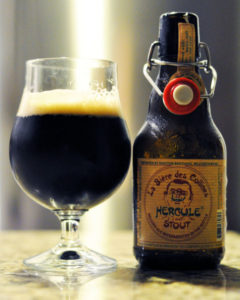